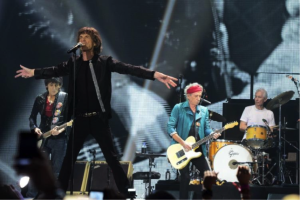 The concerts will be held in Abu Dhabi on 21 February, Tokyo on 26 February, 4 and 6 March, Macau on 9 March. This will be the first time the band performs in Macau and Abu Dhabi.

THE ROLLING STONES 14 ON FIRE tour, produced by AEG Live, will see Mick Jagger, Keith Richards, Charlie Watts and Ronnie Wood head back out on the road after a critically acclaimed mammoth run of concerts in the U.S. and the U.K. in 2013.

Mick Taylor, who was a member of the Rolling Stones from 1969-1974, will be a special guest for this tour.

The stage design for the concerts is based on the band’s ubiquitous tongue and lips logo.  Known for their ground-breaking sets and use of cutting-edge technology, the Stones’ set design will feature video screens and special effects that will enhance the high-octane experience of attending a live Stones show.

The band will treat their generations of fans to a set packed full of classic Stones hits such as “Gimme Shelter,” “Paint It Black,” “Jumping Jack Flash,” “Tumbling Dice” and “It’s Only Rock ‘N’ Roll,” curated with lesser known gems, plus a couple of unexpected cover versions.

The Rolling Stones were recently crowned the ‘Best Live Band’ at the NME Awards in London, and over the past 12 months have thrilled fans with the release of a ground-breaking new documentary, “Crossfire Hurricane” a greatest hits collection, “GRRR!” a massive U.S. tour; and a groundbreaking, back-to-back, sold out set of two historic Hyde Park concerts in the U.K. in front of 120,000, chronicled in a new concert film “Sweet Summer Sun – Hyde Park Live.”

Specialists in Asian equities and fixed income asset classes, Eastspring Investments operates in Japan, Malaysia, Singapore, South Korea, Taiwan, Hong Kong, the United Arab Emirates, Vietnam and Indonesia, and has joint venture operations in India, China and Hong Kong.  It also has operations in in the US and Europe.